“I will persist until I succeed. Always will I take another step. If that is of no avail I will take another, and yet another. In truth, one step at a time is not too difficult. I know that small attempts, repeated, will complete any undertaking.”  Og Mandino on Missing Goals

You will agree with me that people are quite health conscious today, especially the younger generation. The sprawling business of gyms and other health clubs can prove that. MNCs can be seen to take care of the health status of their employees by providing gyms and other sports facilities for them. My friend, Jubin in his early forties is working in one of the most prestigious IT Companies. Due to work and family pressures, however, he often remains under stress. His BP remains on the higher side and blood sugar is also on the negative side of the safe limits. Doctors advised him to reduce body weight along with other measures. During our discussions, he decided to control weight by using some time at Company’s gym. When I happened to see him after about 6 months, I was surprised as he had gained weight rather than reducing it. He tried the gym but could not discipline himself to be regular. Still, he was expecting good results. Even now he is going to the gym but as and when convenient. He had all the excuses for not getting regular. His health condition continues to deteriorate and doctors have increased his dose for medicines.

Once it happened at Oklahoma. A Geologist was sent by a Company to Oklahoma for identifying the place of maximum petroleum in the city. He did the number of surveys at different places but found nothing. One day he got the information that his parent company has gone bankrupt. He thought that his luck is bad. So, he decided to go back and reached the railway station. While waiting for the train, compelled with his habit, he connected his instrument at the railway station. The needle took full circle. He was desperate and thought that now the instrument is also making fun of him. At a place where there is no petroleum, it is showing too much of it. So, he kicked his instrument and boarded the train and left for his home. To his surprise, a few days later, some other scientist declared that the Oklahoma City is literary floating over oil and his search made him a millionaire instantly. Unfortunately, our friend scientist remained mediocre throughout his life.

You can recall many similar cases where a person could achieve his goal if only he persisted. Therefore, if you are willing never to miss a goal, develop the habit of persistence.

Let us quickly examine some real-life examples to understand whether persistence has made a difference in someone’s life:

At 30, Amitabh was regarded as a failure. Film producers considered him too tall for lead roles. He was rejected several times. But his persistence paid and after 8 years of persistent efforts, he was recognized as one of the most influential actors in Indian cinema.

Later in life, he suffered a lot of setbacks. These were related to his financial as well as health issues. Most of the persons under such critical circumstances would have taken a back seat. But, Amitabh persisted. He continued making efforts and has proved again and again that the real victory is when you bounce back after being knocked down several times. Persistence is the single most characteristic of a person for earning success.

His wife, Falguni Devi fell sick in 1959. The nearest city for medical care was 70 km away on a mountainous path. She could not be taken there in time and lost her life. It was then that Dashrath decided to help his villagers to have fast access to medical facilities. He worked 22 years single-handedly and carved a path through the mountain of Gehlour Hills in Bihar, using only a hammer and chisel. This has reduced the distance of 70 km to just 1 km.

Imagine friends! Breaking mountain with just hammer and chisel all alone? People laughed at him and made fun of him. Can anyone persist under such situation? Yes, Dashrath persisted. And today he is known as Mountain Man. Ketan Mehta has made a documentary film on him.

Friends! If you look around, you will notice several people who did not accept defeat. To name a few: Dr. Abdul Kalam, Michael Jordan, Mary Com, Thomas Edison, Rajnikant, Geeta Phogat, Abraham Lincoln, Oprah Winfrey, Sylvester Stallone, Walt Disney, Narayan Murthy, Arunima Sinha and MS Dhoni. They continued to make efforts even after repeated failures until they achieved their goals. So, let us now understand what persistence really is?

Persistence is defined as “voluntary continuation of a goal-directed action in spite of obstacles, difficulties, or discouragement” (Peterson and Seligman, 2004, p. 229).

Rich Devos asserts, “If I had to select one quality, one personal characteristic that I regard as being most highly correlated with success, whatever the field, I would pick the trait of persistence. The will to endure to the end, to get knocked down hundred times and get up off the floor saying, “Here comes number hundred oneth!”

In fact, you don’t fail when you fall; you fail when you refuse to get up. There will be challenges on the path of achievement. Nothing comes free in life. You have to pay a price for everything. For achieving goals, you have to pay the price in advance. The price may be in the form of interim failures. Some people take a back seat after a few small failures. As a result they never achieve big goals. But those who do not accept failures and keep on repeating their actions wisely, ultimately wins and reach their goals. In fact, you can’t fail if you don’t quit. Persistence gives you the strength to succeed.

Going back to our 2 cases discussed in the beginning, my friend Jubin could improve upon his health if only he persisted to prioritize his gym activity. Maybe it was difficult. But that is the price he had to pay. And, the good health could impact his life in a great way.

Similarly, our friend scientist could become multi-millionaire, only if he performed his railway station experiment wisely. 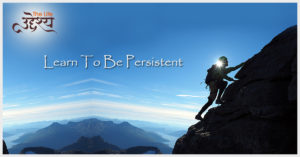 HOW TO DEVELOP PERSISTENCE?

Persistence is a quality that successful people possess. With a little bit of efforts, it can be developed or strengthened. Follow the steps outlined below to master this characteristic:

Friends! Learn to enjoy your life happily. Have fun. You can find your happiness in making small goals and achieving them fast. Then, celebrate the success with friends and relatives and move on. Make another, but, little bigger goal and keep progressing till life is there. Expect hurdles to be a part of the game and learn to cross the hurdles by defeating them. Never get discouraged by negative results but take lessons from them and proceed further. Just be persistent. Nothing can stop you. You are a winner.

WHY DO HARD WORKING PEOPLE FAIL

HOW TO MANAGE EFFECTIVELY AT JOB & GROW PROFESSIONALLY

FAILURES: FROM MY MEMOIRS, PART 3